Unlock this article and more benefits with 25% off.

We have come a long way from the days when the main rest-day activities known to climbers were jogging, stretching and drinking with your buddies. There is now a daunting list of options, many of which may have a positive, complementary effect. However, balance is always an issue, with potential to lose your way and for your training to do more harm than good.

Below is a review of options, with brief guidelines on strategies and pros and cons. For the purpose of classification we will include all forms of training that don’t actually involve climbing. To be clear, this piece is not about what to do on rest days during climbing trips or performance periods, but rather the types of complementary training that can be conducted, mid-training program, on days when you don’t do climbing-based training. Rest days on climbing trips or during projecting periods is a separate topic.

While most climbers understand aerobic cross-training to be valuable, tastes and tolerances vary considerably, from the predilections of the ultra-runner to those of the couch potato. The cardiovascular demands of climbing increase the further you move away from bouldering toward sport and into trad routes, and thus your preferred discipline should determine the amount of supporting CV work you do.

It works best to maintain a certain degree of cardiovascular fitness year-round by training a minimum of once or twice a week, increasing it to three to four times a week during periods of time off from climbing or phases of endurance-based training. However, when you are training strength, it pays to reduce hard and prolonged CV sessions in order to promote quality training and maximize recovery.

Running and use of cross-training/elliptical machines are preferable to cycling, which is prone to building up the leg muscles. If you want to cycle, my advice would be to stick to the roads, minimize hills, and spin with a high cadence. Swimming is best suited to rest or conditioning phases, as it can tire the arms, shoulders and upper body. Those who are less fit should build up from 15- to 20-minute sessions of running, cycling or swimming, etc., at a steady pace until they can sustain 35 to 40 minutes of effort. If you can manage 45 minutes, no need to go for longer as that may be counterproductive for your climbing. You don’t need to train with a heart rate monitor either, just go at a medium level, such that by the end you neither feel fresh nor completely whacked.

According to today’s thinking, anaerobic conditioning provides a better use of your rest-day time than aerobic work, unless you are training for very long routes or have a major weakness in cardiovascular fitness. The ability to switch between aerobic and anaerobic energy systems is very relevant to climbing, more so than relying purely on aerobic systems.

There are two options: You can either incorporate intervals into your cardiovascular sessions (by doing a set number of timed all-out bursts, followed by timed cool-offs) or do high-intensity interval training (HIT) circuits in the multi-gym or at home. Circuits could involve a mix of general endurance-based floor exercises. A great strategy is to include antagonist exercises in these routines, to tick that box simultaneously, but beware of including exercises that work the main climbing muscles (forearms, back and biceps), as those may disrupt recovery from your climbing. Sample exercises are pushups, seated dips, sit ups, leg paddles, dorsal raises, star jumps, squat thrusts, burpees (star jump, squat thrust and press-up combined). You don’t need a heart-rate monitor, but a stopwatch is handy. Guidelines for timing and frequency of sessions are as given for CV training above.

One of the hottest current training debates is the role of strength conditioning in climbing. Strength conditioning (SC) has become so fashionable that some might believe it is as important as climbing itself. My take is that it has a place for those with lighter frames who are in need of general body strength and dynamism, yet it should still be regarded as supplementary training. Strength training also has the most relevance to bouldering, with sport climbing coming a close second and trad or multi-pitch being less relevant.

A good general approach is to do a program of six to eight exercises per session, such as lunges, clean-and-jerk, bench press, bent over row, shoulder press, bicep curl, tricep press, abdominal crunches and dorsal raises, covering all the main muscle groups. Put special focus on weaknesses and full-body exercises, such as clean-and-jerk and lunges. Do three sets of 10 to build a base, and then work toward doing lower-rep sets of four to six. There are endless variations and protocols, and if you’re not experienced, it pays to see a SC coach who understands climbing. A typical campaign might involve three sessions a week during a dedicated conditioning phase, which may last three to six weeks and may be repeated at another point in the year. Note that there is major potential for these sessions to disrupt gains from climbing sessions, so it really doesn’t make sense to overdo it or to continue year-round unless you have a severe weakness in general body strength.

Specific core conditioning can be regarded as a subset of general strength conditioning. Ideally you will perform sessions on rest days from climbing, since your fingers and forearms are usually the most fatigued, while the core is rarely pushed to the limit. However, if you are working hard on very steep routes or boulder problems, your core will usually take a hit; if so, it may make sense to rest the following day rather than punish your core further. 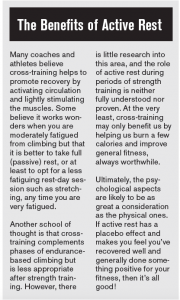 Flexibility work is a no-brainer for rest days, seeing as it doesn’t disrupt training gains, and the benefits are clear, so keep this up year-round. For any climber, one session a week should be the minimum, two are optimum, and three are ideal. The less flexible you are, the more you stand to gain, although those who are flexible should still stretch.

If you can’t make time on rest days, then stretch your legs (e.g.: hamstrings, quadriceps and groin) when resting between burns at the climbing gym. Never do static stretches for your arms on climbing days: save those for your cool down or rest days.

A range of protocol exists for static and dynamic stretching, resistance stretching and so on, but don’t get bogged down with the fine detail—just do it. Do a general program for the whole body, with the most focus on stretching your legs and opening your hips. Hold stretches for 20 to 30 seconds, and perform them once or up to three times.

Most climbers have heard of the importance of training the opposition muscles—the forearm extensors, chest, front shoulders and triceps—to prevent muscular imbalances and associated injuries, yet this type of training always seems to end up at the bottom of the time-versus-priority list. Still, this training is the deal-maker that keeps you in the game.

The key exercises are simple pushups and forearm extensions, performed with an extensor trainer (such as www. thepowerfingers.com or from other brands). Do three to five sets of 20 to 30 reps two to three times a week as a minimum requirement, or, to take things further and build compression strength for bouldering, try working out on suspension straps two to three times a week. Key exercises are the plank, pec fly, dip and suspension push-up. (It is easy to find supporting info online: Simply search “suspension strap exercises” or Google “TRX” workout.) If you’re looking to build strength, keep the reps between three and eight. Use strict form and finish all exercises just before you feel yourself start to lose control. As with flexibility work, keep up antagonist training year-round, either performing the sessions on rest days or at the end of climbing sessions.

For rest-day training, the most important factors to consider are whether the training is complementary and the extent to which the training may cannibalize energy from climbing. So if you only have one gear and tend to destroy yourself on rest days, it may be time to reevaluate your priorities and reel yourself in. On the flip side, if you get spanked on long routes because you’re generally unfit, or if you keep getting injured because you don’t train your antagonists, time to up your game. 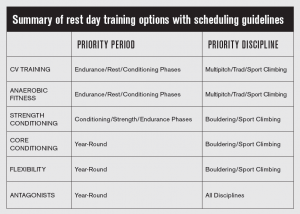 Want Endurance This Spring? Do Some Power-Endurance Intervals

5 Training Myths That Are Probably Hurting You

Need to Build Some Endurance Stat?

Most Climbers Are Training Power Wrong